A Romance Blooms in Nebraska 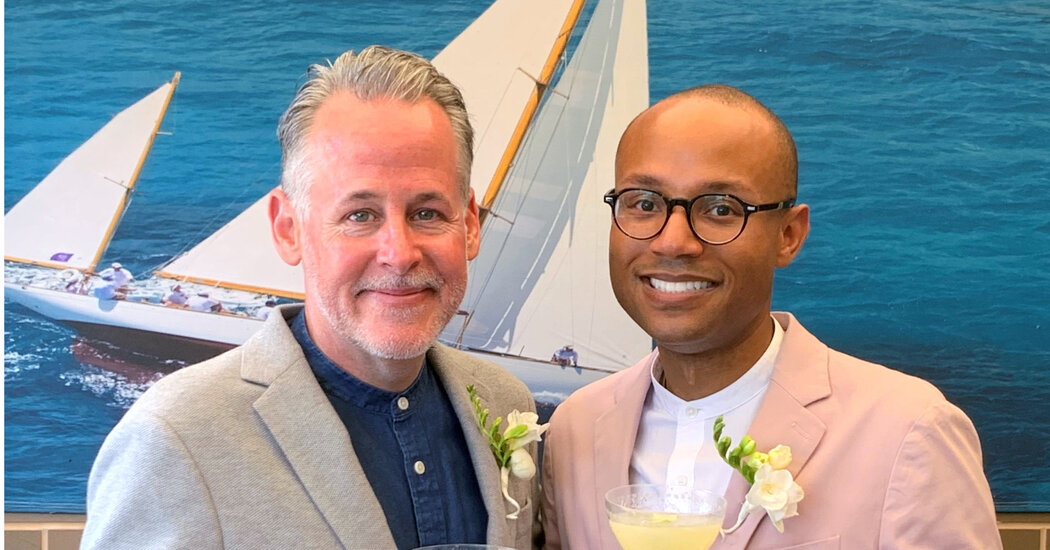 Robert Voelte and Ian Rose call themselves an intergenerational, intercultural, interracial gay couple standing in the center of a blue dot in the middle of a red state. That state is Nebraska, where they met in August 2008 on Mr. Rose’s first day as a vocal music teacher at the Omaha elementary school where Mr. Voelte teaches kindergarten.

“I work at a school where the staff is predominantly younger to middle-aged white women, so Ian stood out,” he said. “I immediately went over to introduce myself.”

If Mr. Rose, 32, who is from Jamaica, felt uneasy in the new setting, Mr. Voelte’s warmth put him at ease. “I remember he said I could come to his classroom to ask him anything, and how kind his eyes were,” Mr. Rose said.

At first, neither wanted to acknowledge an attraction.

“It was 12 years ago and a different world for gay people,” Mr. Voelte said. “I didn’t want to cross an inappropriate line by asking him out.” Instead, he asked, casually, if Mr. Rose would like to have a drink.

That drink, at a Southwestern restaurant on Aug. 29, 2008, kicked off a romance that soon transcended Nebraska. Within a year, they had moved in together and begun a tradition of spending summers in apartments throughout New York City.

“I have an affinity for New York,” Mr. Voelte said. “I adore the people. They have really good hearts.”

In June 2011, the couple volunteered at a Manhattan mass wedding reception organized by the Center, an L.G.B.T.Q. community center, when New York celebrated marriage equality. “It was fun seeing other folks being able to do these things.”

But asking Mr. Rose to marry him did not cross his mind. “It took the Supreme Court decision in 2015 for Nebraska to recognize same-sex marriage,” he said. “It wasn’t accepted until then.”

The local reluctance felt prohibitive, and all too familiar. “My parents never believed in gay marriage. That was kind of in the back of my mind,” Mr. Voelte added.

When his mother, Virginia Voelte, died in 2019, his inclination to not marry evolved. He had already decided he wanted to spend the rest of his life with Mr. Rose, now an administrator with Omaha Public Schools. On the 10th anniversary of their first date at the Southwestern restaurant, he surprised Mr. Rose with a Cartier Love ring.

“I gave it to him the way you would give somebody a promise ring, like an anniversary ‘I love you,’” he said. But earlier this year, on Valentine’s Day, he doubled down on that promise and asked Mr. Rose to be his husband.

Mr. Rose felt his “yes” was a long time coming. “Marriage was something I always wanted,” he said. They planned a small July 19 wedding at the Stonewall National Monument in Manhattan’s Christopher Park as the finale to a seven-week vacation with stops in Canada and Europe. But Covid-19 changed their plans.

On July 11, after a road trip from Omaha, they were married in a self-officiated ceremony at Fiola Mare, a restaurant overlooking the Potomac River in Washington. They chose the location for its proximity to Mr. Rose’s mother and sister, who live in Rockville, Md.

The atmosphere at a post-wedding brunch reception was enhanced by a few items of décor brought from Omaha, including an orchid Mr. Voelte had given his mother during her final days in 2019. “It had rebloomed,” he said.

The Wedding I Never Thought Would Happen

By Charanna Alexander Since the onset of Covid-19, many people have found themselves feeling nostalgic for more certain times. For ...

He Stopped by Her Table, and Then Into Her Life

Khrehaan Ebah’s chat with the restaurant manager who asked if she had enjoyed her lunch in March 2018 wasn’t for ...

Behind the Scenes, Romance Catches a Spark

Matt Polk got his first glimpse of Devin Keudell one day in the early 2000s, when Mr. Keudell was standing ...

‘Mr. Downstairs’ Had the Key to Her Heart

Elma Holder couldn’t help feeling ridiculous on days when “Jerry Downstairs,” as she called him, would leave the retirement community ...

Marty McFly and Beer Were the First Pairing That Day

Dyanna Villaluna Quizon prepared for her first date with Dane Clifford Volek the way most 31-year-olds in 2015 would: She ...