He Had Caught Her Eye 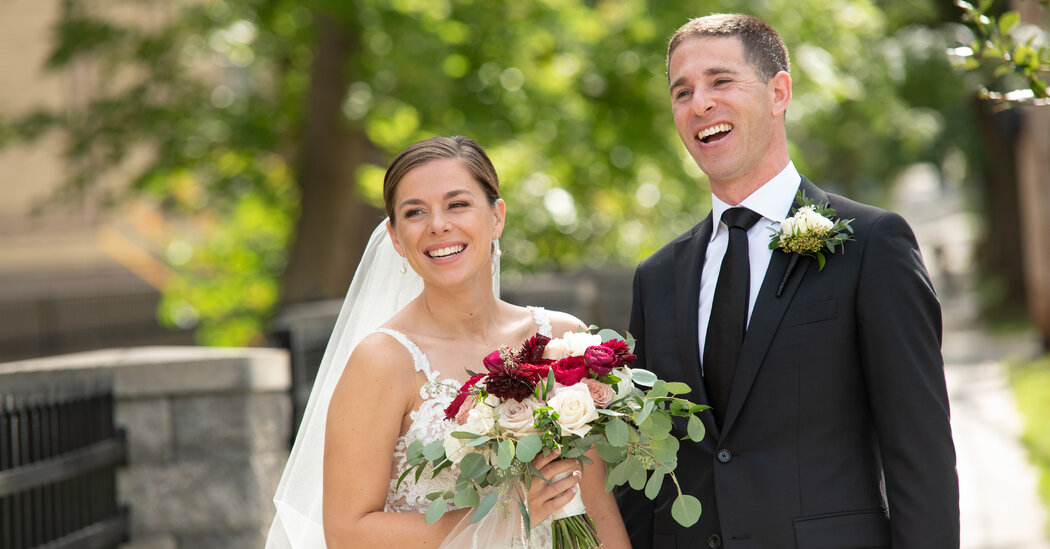 When a cousin suggested an introduction to a colleague, Taylor Vogt immediately recognized a photo of the potential date, Craig Alfred, as the tall, athletic and good-looking man she had seen repeatedly while walking to her government job in Albany, N.Y.

“He obviously caught my eye,” she said. “I just worked up the courage and sent him a text and we arranged a time to meet.”

It emerged that the two lived within a few blocks of each other, and so they met up after work on May 5, 2015, at Washington Park. Mr. Alfred, now 33 and an assistant legal counsel for New York’s economic development agency, Empire State Development, brought a blanket and a cooler containing a six-pack of Corona beers, in a nod to Cinco de Mayo.

They chatted easily and as both were reluctant to see their initial date conclude, they decided to have dinner at a nearby Mexican restaurant. They found they both liked the Adirondacks and thoroughbred racing in Saratoga Springs, N.Y., and both came from families with deep roots in New York politics.

“We really did just hit if off right from the start,” said Ms. Vogt, now 30 and a community corrections representative in the probation and correctional alternatives office of the state’s Division of Criminal Justice Services. She graduated from St. Lawrence University and received a master’s degree in criminal justice from the Rochester Institute of Technology.

Mr. Alfred, who both graduated and received a law degree from Tulane, said they became serious within a month of that first date. “I just kept wanting to see her,” he said. “That spring I had dated around and didn’t really find anyone I liked, and then I met Taylor and I stopped even thinking about dating anyone else. That was it.”

Ms. Vogt remembers a moment soon after they started seeing each other in which he somewhat abruptly withdrew from their evening plans, and then called later to apologize.

“It just felt like, for a guy to come out and apologize, I just thought that was so refreshing and I just remember being like, this is great,” she said.

Within a year, the two had moved in together, and Ms. Vogt, who comes from a large Roman Catholic family in Rochester, found herself falling in love with Mr. Alfred’s temple, and with Judaism, too.

“It was never a requirement for Craig at all, and I think that’s the beauty in it,” said Ms. Vogt, who converted to Judaism. “He would have married me regardless.”

On Sept. 12, in the front yard of Mr. Alfred’s father’s house in Delmar, N.Y., the two were married before about 40 guests. Rabbi Scott L. Shpeen, who is the senior rabbi at the couple’s temple in Albany, Congregation Beth Emeth, officiated. They had originally intended to be married at the temple, where Ms. Vogt is now a trustee, in April, with 250 people attending, but were forced to cancel after the arrival of the coronavirus pandemic.

Ms. Vogt said that while she was crushed to have their “big Jewish ceremony and wild party” canceled, they welcomed the extra five and a half months they had together at home.

“Our relationship has only grown and gotten stronger,” she said. “There are some relationships that never have challenges this early — this was large for us — but we got through it better than we were. I wouldn’t have traded that for anything.”

Prepping Your Pet for a Walk Down the Aisle? Hire a Concierge

Setting a Record at the Retirement Community

Mia Aplin Rollins and Samuel Sebastian Pihan, both 25, set a record on Oct. 3 as the youngest couple ever ...

Forging Through ‘the Chaos of Life’ Together

In the modern age of dating, where your next suitor could be just a swipe away, some singles have grown ...

Making a Name of Their Own

In April 2018, Erik Simpanen was a graduate student at Brown living in Providence, R.I., when he swiped right on ...

Proceed to Baggage Claim for Your Luggage (and Future Husband)

When a teenage Zaid Hassan and his family moved from Lahore, Pakistan, to Austin, Texas, in 2002, the culture shock ...