The Wedding That Wasn’t Sad 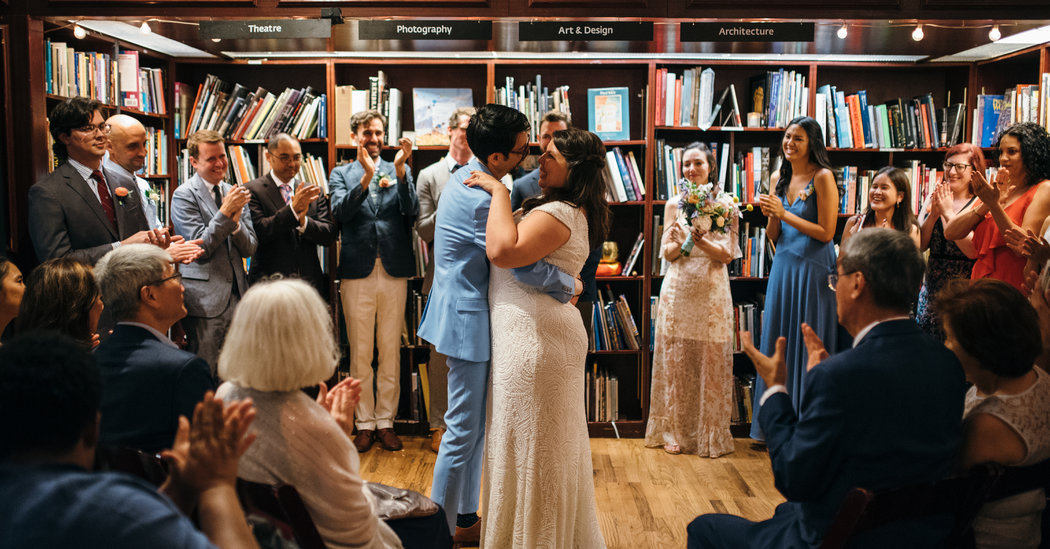 Our wedding was about to begin. I wore an ivory embroidered Tadashi Shoji gown and clutched a bouquet of coral ranunculus and periwinkle thistle. My throat was tight, my cheeks were flushed, and my scarlet lipstick was probably fading, but I didn’t care. I was ready to marry David Sanchez.

David’s father saw me. “Kim! Who’s giving you away?”

“No one,” I said with a laugh. Even when my dad was alive, I had never intended him to give me away, like a cow or a piece of property. We’re a “nontraditional” couple: We were getting married at Housing Works, a bookstore and cafe in SoHo that supports a charity to fight H.I.V. and homelessness. This was not a church ceremony, and I wasn’t wearing a veil.

But I was reminded, yet again, of my dad’s absence.

“I could walk you down the aisle!” David’s father offered in a spontaneous gesture.

Touched by his sentiment, I replied, “I’m O.K., but thank you. I appreciate the offer.”

For the last two months of his life, wedding planning took a distant back seat to simply spending time with my dad. We tried to make him feel comfortable and loved as he departed from this world. And we agreed that it was better to go forward with our wedding as planned than to postpone it. But when we realized that there would be no funeral — since my dad simply wanted his ashes scattered from the Brooklyn Bridge — it became apparent that our wedding would be the first time the family would gather after his death.

So now we had to decide: How could we honor my dad without turning our wedding into a funeral?

Our mantra for wedding planning became: “Is it absolutely necessary?” Our wedding plans had always been relatively simple, even before my dad’s illness took its worst turn. Once we decided on Housing Works as our venue and Pies ‘n’ Thighs as our caterer, we considered everything else optional. Invitations, necessary. D.J., not necessary. Flower centerpieces, not necessary. Vintage movie posters that David found for table centerpieces, adorable. Spanx, a disaster. Lane Bryant smoothie underwear, a perfect compromise. Gluten-free vegetarian meals for guests with dietary restrictions, imperative. Friday and Sunday events, planned casually in the final weeks.

[Sign up for Love Letter and always get the latest in Modern Love, weddings, and relationships in the news by email.]

All the fad diets, Whole30 aspirations, and bridal pampering had long gone out the window. So I had to accept that I would be a “real” bride — without six months of dieting, exercise, facials, hair trials, or any of those regimens that promise to transform brides into a paragon of beauty. Instead, I remained untransformed, still grieving, still plump and full of curves, still exactly who I had been during the most difficult spring of my life. Whoever I was already would have to be enough.

Dropping the bomb of my dad’s death during final wedding preparations often seemed both absurd and maudlin. At our final venue meeting, our coordinator reminded us that the ramp was ready for my father’s wheelchair. I just shook my head. “No ramp needed.” His face dropped. “Oh God, no!” My cousin and I went to Clinique, and when I asked for waterproof mascara, the saleswoman said, “You’re not going to cry, are you? Don’t be a wuss!” My cousin and I shared a look. When I got my hair done on the morning of the wedding, the stylist twisted my hair into a “roped” style rather than a braid, which reminded me of my dad’s love of nautical knots and triggered a puddle of tears. “I’d give you a tissue,” she deadpanned, “if my hands weren’t so full of your hair.” I laughed through my sniffles. “I’m fine,” I said. “It’s better to cry now, when no one can see me.”

During the ceremony, my dear friend Eva Chen, who was my college roommate at Stanford University, delivered a reading on loss from The New Yorker. It was entitled “When Things Go Missing,” by Kathryn Schulz, and I had found it on Twitter on Father’s Day. In it, Ms. Schulz writes about how reflecting on the nature of loss gives life meaning. It was almost too much of a downer for a wedding, but my argument was this: “There wasn’t a funeral for my dad’s family. Some people didn’t even know he was sick. Let’s get everyone in the room on the same page. Without a funeral for my dad, I need this.”

Eva paused at my favorite part in the essay: “When we are experiencing it, loss often feels like an anomaly, a disruption in the usual order of things. In fact, though, it is the usual order of things. Entropy, mortality, extinction: the entire plan of the universe consists of losing, and life amounts to a reverse savings account in which we are eventually robbed of everything.”

I felt the energy of the room crackle. Everyone was paying attention. This wasn’t just your typical “happily ever after” spiel. I have never felt less alone in grieving my dad than in that moment, because everyone in the room was feeling his loss together. By choosing not to deny the pain of death, I believe that we entered a more honest conversation about what a wedding does to join two families and mark the next chapter for a couple. In our wedding, loss became a compass that pointed us away from a fantasy and toward celebrating the difficult realities of life.

At the end of the ceremony, David sang “Married” from the musical “Cabaret,” accompanied by his friend, Nick Ceglio, on my father’s guitar. Hearing David’s voice meld with the rich tones of my father’s guitar, I felt joy filling all the holes in my soul that had been punctured by grief.

My dad had been a musician in every sense of the word. He taught himself to play the guitar as a teenager, and for 50 years, mastered everything he played, from Bach to Eric Clapton to Scott Joplin to the Beatles, so listening to him was always a gift. He taught me to love the transformative power of music. We felt he was with us in spirit.

As David sang, I listened, and my waterproof Cover Girl mascara and my hair stayed put. After we were married and rings were exchanged, fried chicken was served, and our friends offered funny and touching toasts. A memory table offered our guests photos of our dearly departed, including a photo album that I made for my dad when I was a child, complete with a 7-year-old’s attempt at witty captions.

Of course, we wished that my father could have been there. “I think we did our best to make sure that he was there,” David said. I agreed. Celebrating his life at our wedding made me grateful for all the time I had spent with him, because it all goes by so fast.

Kim Liao is a writer and writing lecturer at John Jay College of Criminal Justice. She lives in New York with her husband, and is writing a family memoir of Taiwanese Independence.

Under the Stars with Shiraz and Scorpions

Simone Rachel Press and Michael Richard Foy met at the end of December 2016 after joining a tour group at ...