There Was Something Funny About Them 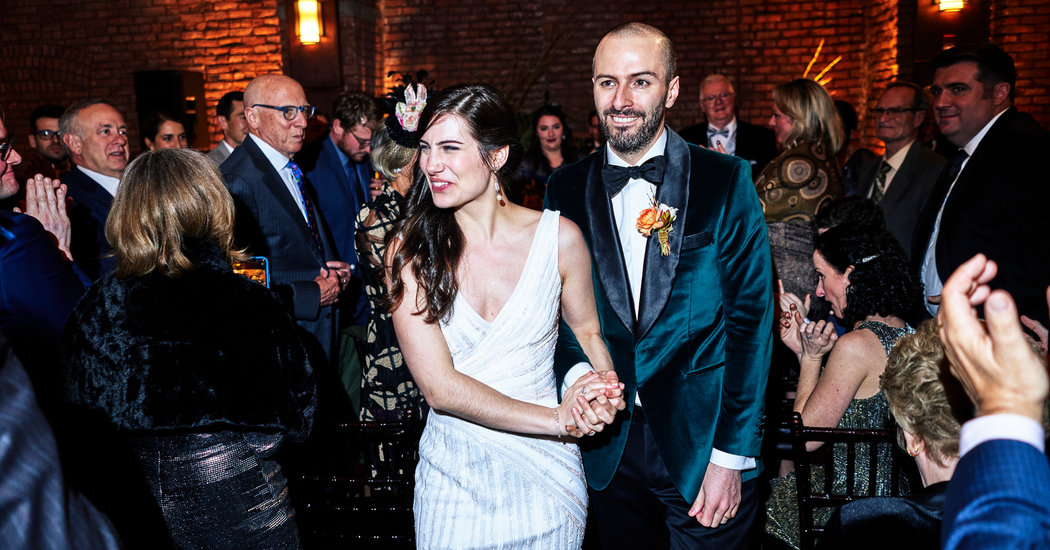 “It was so hot in the city that day — over 100 degrees — and I rode my bike across Williamsburg to get there,” Ms. Stonebraker said of that sweltering day in August 2016. “I looked so nasty.”

Ms. Stonebraker, 31, an actor and comedy writer who appeared last year in “A Few Activities,” a short film that became a Vimeo staff pick, had arrived in Brooklyn from her native Chicago only weeks before, and was living in a Williamsburg apartment for all of two days before various issues regarding her lease forced her to move out.

Searching for a new apartment, Ms. Stonebraker answered a Craigslist ad — “3 Comedians Looking for A Roommate” — that had been posted by Mr. McCarthy and two close friends, all three of whom shared a ground-floor apartment in Williamsburg they called “BoiZone.”

“She seemed cool and I thought she was attractive,” said Mr. McCarthy, 34, a co-executive producer of TruTV’s “(Impractical) Jokers.”

“We lived with attractive girls before, and had attractive friends, and there was never a problem,” he said. “This one was simple. We just needed money to help pay the rent.”

Ms. Stonebraker had just one question for Mr. McCarthy after touring BoiZone: “Are you a feminist?”

When he answered “yes,” she agreed to move in.

Two weeks later, Mr. McCarthy was home talking with a friend when Ms. Stonebraker walked in to pick up her new keys. Mr. McCarthy looked up, and was speechless. Her sweaty Bill Murray T-shirt had been replaced by a black mini- dress.

“My heart started racing, and we flirted a bit,” he said. “When she left, my friend rolled her eyes and said, ‘That’s your new roommate?’ I said ‘yeah, and it looks like this might be a problem.’”

After she moved in, she and Mr. McCarthy continued flirting. They stayed up late that first day, with him entertaining her with jokes he had written for “Impractical Jokers.”

Trying not to give Ms. Stonebraker the impression that he was fawning over her, Mr. McCarthy did a little creative acting to make it seem as if he was inviting her by default.

“I asked my friend Dan, who I knew had a crush on Diane Lane, but also knew he wouldn’t go to a Broadway show,” he said. “Then I asked my friend Cary, who I think I kind of knew worked on Saturdays, and when they both said no, I said, ‘Well, I guess I’ll have to take you, Phoebe.’”

Unbeknown to Mr. McCarthy, Ms. Stonebraker already had a major crush on him. It started the day she returned to his apartment to pick up the keys. “He was wearing gym shorts that day — need I say more,” Ms. Stonebraker said, laughing.

She accepted his invitation to the theater, suggesting they “dress up just for fun.”

“The tickets were $30 apiece and I was practically broke, having spent my savings to get from Chicago to New York to continue working in comedy,” Ms. Stonebraker said. “I figured why not go all out and make a real night of it.”

Mr. McCarthy agreed, and they arrived at the theater a bit early, and proceeded to go upstairs to sit on the balcony.

“It was a beautiful night,” Mr. McCarthy said, “just perfect.”

But the atmosphere shifted when Ms. Stonebraker, doing her own bit of creative acting, provided the night’s most memorable line: “The stars are out and we’re drinking wine,” she said to Mr. McCarthy. “Why don’t you propose to me, here and now?”

Mr. McCarthy, thinking she was serious, became speechless once again.

“I know I had a crush on her, but how could I respond to that,” he said. “This was supposed to be just a couple of roommates hanging out.”

Ms. Stonebraker soon told Mr. McCarthy she was only kidding, but noted that his silence spoke volumes. “If he wasn’t serious about me, he would have never reacted in such an awkward way,” she said. “That told me that he had a crush on me.”

They continued to spend time together, and some of their nighttime chats turned toward family and tales from along the paths that took them to each other.

Ms. Stonebraker is the oldest of two daughters born to Deborah Stonebraker and Kelly Stonebraker of Chicago. Both are lawyers. Ms. Stonebraker, who grew up a competitive figure skater, was planning on a professional skating career until she suffered a knee injury in 2011. She then turned her primary focus to comedy.

[Sign up for Love Letter and always get the latest in Modern Love, weddings, and relationships in the news by email.]

After graduating that same year from Wesleyan University, from which she received a degree in biology and environmental sciences, she joined the Second City conservatory program in Chicago, famous for producing stars like Tina Fey, Stephen Colbert and John Belushi.

When Ms. Stonebraker landed in New York and began pursuing work in the world of comedy, she took on a series of “survival jobs,” as she called them, to support herself. “I was a bartender, I taught science, and I worked at a nature museum for a while,” she said. “I was just trying to work on my craft while paying bills.”

After meeting Mr. McCarthy, she appeared in two episodes of “Impractical Jokers,” and now spends most of her days writing comedy, and most of her nights going on auditions.

Mr. McCarthy graduated from N.Y.U., where he helped lead the cross country team to an N.C.A.A. Division III national championship in 2007. After school he studied improv and sketch comedy at the Upright Citizens Brigade Theater. He is the son of Mary Ciardullo Kelly of Hilton Head Island, S.C., and James C. McCarthy of Brooklyn. He is also the stepson of James D. Kelly. All are in the insurance industry.

In September 2016, Ms. Stonebraker and Mr. McCarthy both attended separate weddings, she in Virginia and he in Colorado. They admitted their crushes to each other over the phone that weekend.

“We couldn’t stop texting each other while we were apart,” Ms. Stonebraker said. “He said to me ‘I really like being around you, I want to be with you more in every way.’”

“It was clearly a seminal moment in our relationship,” she said. “Everything changed after that.”

When Mr. McCarthy returned from his wedding — Ms. Stonebraker got back before him — he burst through the door, slammed his travel bag to the floor, ran toward Ms. Stonebraker and began kissing her.

“It was like a scene from a movie,” she said.

They starting dating immediately, even though they both acknowledged it was a terrible idea to date a roommate.

Their parents were feeling much the same. “I told Phoebe not to move in there because she was going to be living with three men and one of them was going to fall in love with her and then she’s going to have to move out,” Deborah Stonebraker said. “Phoebe actually said less about James than his two roommates, so I got suspicious. I knew that she was clearly holding something back.”

“Give me a day and I will let you know,” his mother said. The next morning, she reached out to Ms. Stonebraker by phone. “Please call me Mom.”

In November 2016 Mr. McCarthy and Ms. Stonebraker decided to leave BoiZone, and with their cat, Kiki, moved to an apartment on Manhattan’s Lower East Side.

“We love our roommates dearly, but it was becoming impossible to live with them anymore,” Mr. McCarthy said, laughing. “Every time we kissed they would ‘awww,’ and every time we’d bicker about what was on TV, they would ‘ooh.’ It was as if we were living our lives in front of a studio audience.”

They were married Jan. 25 at 26 Bridge, an events space in Downtown Brooklyn, where Jared Lapidus, a friend and former roommate of the couple who became a Universal Life minister for the event, officiated before 220 guests, whom he entertained with a nearly 20-minute standup routine.

“James and I were roommates at N.Y.U. for three years, and for another five after college,” Mr. Lapidus said. “That’s eight years of living together, which technically qualified us for a common law marriage and a pretty sweet tax break.”

“So, as Phoebe’s former roommate, and James’s first husband,” Mr. Lapidus said, “I feel like I’m in the unique position to shed some insight into what makes the two of them great partners.”

“Firstly, they’re both wicked smart, two of the most intelligent and insightful people I’ve ever had the pleasure of knowing,” he said. “Secondly, they’re both outrageously kind, genuine and empathetic, they simply radiate goodness. It’s infuriating.”

The bride was soon walking down the aisle to Elvis Presley’s “Can’t Help Falling in Love.”

“I promise not to fight when I’m hungry,” the bride said to the groom during the exchange of vows.

Shortly after the ceremony, guests gathered for a reception on the site and the groom’s father smiled as he watched the newlyweds dance to their first song, “I’m Kissing You” by Des’ree.

“Look at them out there together,” he said. “They light up every room they walk into.”

Their Best There was no best man at the wedding. The bride’s sister, Hannah Stonebraker, served as maid of honor, and the groom’s sister, Dr. Christine E. McCarthy, 36, as the best woman. Also, not present, was their best cat, Kiki.

Phoebe List On the morning of the wedding, the groom texted “Things I love about Phoebe,” to the bride. Among his 23 entries were: “How much she loves snacks and how happy they make her,” “How she takes care of the cat,” and “How skilled she is at acting and writing.”

No Joke This Time Sal Vulcano was the only one of the four Impractical Jokers at the wedding as the other three were out of town. “Weddings are always a greater experience when you know both the bride and the groom and you really, really love them both, and that is definitely the case here,” Mr. Vulcano said. A few days after the wedding, the entire cast was back together to begin working on Season 9 of the show. “James was there, of course, and all the guys congratulated him and were filled in on all the details,” Mr. Vulcano said. “It was awesome.”

For many couples who are planning a wedding, vendor selection is a key part of what brings their vision to ...